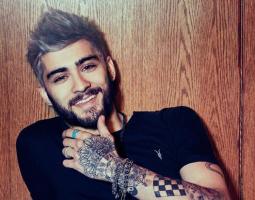 Zayn Malik is shocking fans with a dramatic new look after shaving his head completely bald.

Gigi and Zayn are together for the long weekend celebrating the Muslim holiday of Eid.

"I'm not currently practicing but I was raised in the Islamic faith, so it will always be with me, and I identify a lot with the culture. But I'm just me," he said earlier this year. "I don't want to be defined by my religion or my cultural background."