Zack Snyder: 'Justice League' Movie Without Superman Would Be 'Intriguing' 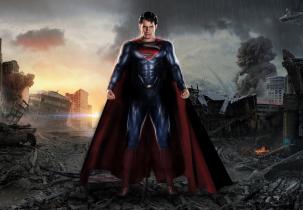 With the release of the latest trailer for the 'Justice League' movie, director Zack Snyder is teasing fans with what they can expect.

Superman was notably missing from the trailer and while fans don't expect the superhero to be left out of the movie altogether, Snyder calls the thought "intriguing."

Of course, Superman, was in a casket at the end of 'Batman v Superman: Dawn of Justice'.

"It's hard to have a Justice League without Superman. That's how I feel about it," Snyder laughs.

"It was always a super-intriguing concept to me to have this opportunity to have him make that sacrifice but also have him be this, in a weird sort of way, the why of Justice League: What do you do now with him? What does the team think? What does the world need?"

"All that comes into play. It's fun for us but it'll be interesting for audiences what we do with him."

With Superman not in the picture, Batman takes the lead in putting the team together.

"He's been a loner for certainly his crime-fighting career, maybe with the exception of Robin," Snyder says. "When we meet him in BvS, he's definitely at this low point of isolation. That was always our intention, that Justice League would be this continuation for Batman to evolve into a more complete hero."

As for the other stars, Snyder says: "They're each such awesome personalities in the movie. You have Jason Momoa stomping around as this inked hairy man, just this mythic figure (Aquaman). And you've got Ezra Miller, who's full of life and hilarious and all over the place and amazing — a really fun and also poignant Flash. And Ray Fisher's story (Cyborg) is in a lot of the ways the heart of the movie."