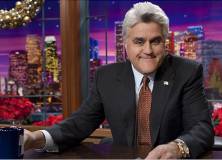 "Name It. Change It," a group that is seeking "to end sexist and misogynistic coverage of women candidates," says The Tonight Show host "made severely misogynistic jokes about Christine O'Donnell giving oral sex."

"Now, I know you're a very opinionated guy," Leno began in the segment. "I see you on my friend Bill Maher's show and all that stuff, and you were talking about this Christine O'Donnell, you know, the anti-masturbation woman who is running for Senate, and you were talking, and you said you would enjoy having sexual relations with this woman?"

"You know, that was a little joke," explained McFarlane. "He showed a clip from her, and I think it was like 1998, and she had the poofy '80s hair, and it made her look like Kelly Kapowski from 'Saved by the Bell.'"

"Wow, now, why do you find... does the fact that she's the anti-masturbation candidate," asked Leno.

"I think the second she opened her mouth, it would probably ruin everything," said McFarlane.

"This type of sexist commentary is extremely damaging to women running for public office and should not—under any circumstances—go unrecognized by the general public," says the group. "A study conducted by Lake Research Partners reveals that sexism, even in its mildest form, has a damaging effect on the political standing of female candidates."

"While MacFarlane's statements to Bill Maher were harmful to women candidates, we are especially concerned that Leno sanctioned and furthered the joke."

"We are reaching out to The Tonight Show and asking that Jay Leno offer an apology to Christine O'Donnell."