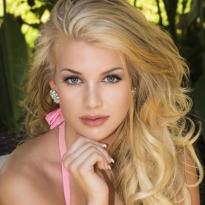 Chris Brown was arrested Tuesday on suspicion of assault with a deadly weapon after pulling a gun on a woman during a gathering at his home.

The arrest marked the conclusion of nearly 14-hour-long stand-off after a 911 call to police.

Baylee Curran, a model and beauty queen, says Brown pointed a gun at her face. Brown has denied any wrongdoing.

Curran tells 'Extra' she had met Brown several times and was at his home to talk about upcoming projects.

"I saw a man who was showcasing the diamond bracelets, and the watches and the necklaces, and of course I saw one that was beautiful, so I was admiring it," she says of what happened inside.

"It was a diamond cross necklace, and as I was admiring it, simply just standing over it, looking at it, didn't touch it, didn't pick it up, wasn't trying to take it or anything.... a guy with dreads came at me, cussing, yelling, calling me names, saying, 'Get away from the diamonds.'"

"Chris came in, pulled out his gun and said, 'I'm getting so sick of you people,' pointed the gun at me, and told me to get the F out of the house."

Curran says she wanted to walk out but couldn't leave because she didn't have her phone. She claims Brown's team wanted her to sign a nondisclosure agreement before returning her phone, but she refused.

"I took my phone and made a run for it. I fled down his driveway," she continued. "I went to the left side of the street, went up a couple houses, was running. That's when the neighbors heard the commotion and saw me out there and then called the police, and that is when I then called the police."

"There are witnesses. I had my friend with me, my girlfriend... she actually fled with me, went running down the street, was there when the cops came, saw the gun, saw the threats."

"I'm sure Chris' friends won't vouch for me, of course. I don't lie, I would never lie. Why, for what? I don't need the publicity."

"I'm already kind of well-known being Miss California Regional, modeling, upcoming actress, so if I was doing this for fame or something of that sort why would I do it this way?"

"I would say to Chris, be the good person that I know you are. He knows what he has done… I would say, just come out with the truth, because I'm sure it will come out one day anyway."