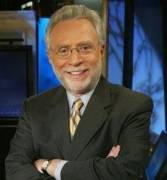 Wolf Blitzer and Jimmy Kimmel talk about the interview during which Senator Bernie Sanders kept referring to him as 'Jake'.

Blitzer laughs about the moment and says he corrected Sanders once but didn't want to keep interrupting the Democratic presidential candidate.

Kimmel also introduced his father, who was at the show, to show his uncanny resemblance to the CNN anchor before asking if 'Wolf' was in fact his real name.

When Blitzer admitted that people often think it's not his real name, Kimmel burst out laughing and hilariously said: "Of course it's your real name, who would change their name to 'Wolf'?"