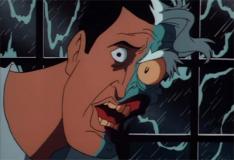 William Shatner will voice the villain in 'Batman vs. Two-Face'.

DC made the announcement at its 'Batman: Return of the Caped Crusaders' panel at New York Comic Con.

The reveal began with a silhouette of Two-Face that faded away to feature a video with William Shatner in which the actor confirmed he will voice District Attorney Harvey Dent aka Two-Face.

The animated film will be a sequel to DC's Batman '66 series.