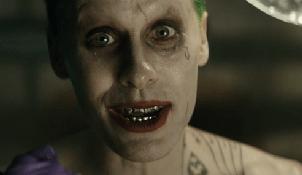 Will Smith says Jared Leto was so heavily into his role as The Joker while filming 'Suicide Squad' that he never met the man behind the makeup.

Smith says he never met Jared Leto while shooting the movie for six months since Leto only wanted to interact with him as the Joker.

"I've never actually met Jared Leto. We worked together for 6 months and we've never exchanged a word outside of 'Action!' and 'Cut!'," he tells Beats 1 Radio.

"I literally have not met him yet. So, the first time I see him will be 'Hey, Jared. What's up?' He was all in on the Joker."

Co-star Margot Robbit, who stars as Harley Quinn, previously said that, as part of staying in character, Leto also sent her a "love letter" with a black box with a rat in it.

We got out first look at Leto's Joker in the 'Suicide Squad' trailer released in July. The film has a release date of August 5th, 2016.