'Will & Grace' Revival Renewed For Second Season Ahead Of Return 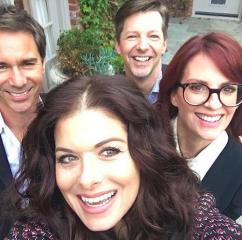 The 'Will & Grace' revival has yet to air but NBC is already giving it a second season.

"Our show is not a news show. Our show is a situation comedy," he said.

Mullally said she knew she wanted to return to the show as soon as they did the 10-minute short before the first presidential debate.

"It felt like coming home and we laughed so hard and for the last year," Messing said of their first table read back together.

"I'll speak for myself, it's been a confusing time. I haven't laughed very much. To come back together and to laugh out-loud and to be surprised by one another and to have new stories to tell and have the opportunity to do it, it's a no brainer. It's just a beautiful, crazy thing that's happened."

Fans will remember 'Will & Grace' ended with a flash-forward 20 years into the future with Will and Grace no longer BFFs but reunited because of their children.

But producers explained on Thursday that the reboot will ignore the events of the flash-forward, which they're pushing further out for now.

"The finale was written when there was no anticipation of ever continuing the show," Greenblatt said. "What I say is we're moving the finale from here to out here. It may still stand at some point."

The 'Will & Grace' reboot debuts on September 28.