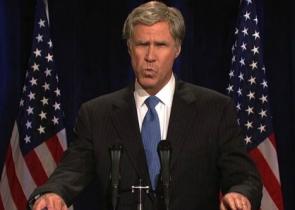 The Comedy Central special was planned by the 'Full Frontal with Samantha Bee' star to rival the traditional White House Corespondents' Dinner.

"How you like me now?," he asked. "The prodigal son has returned. I don't know what that means, but I know it's positive. It's very prodigal."

"You guys would always sneak up on me with 'gotcha' questions like 'Why are we going to war? Gotcha!' and 'Why did you not respond to Hurricane Katrina? Gotcha!'" he said. "I just wish someone had told me all you had to say was 'fake news' over and over again. That could be your answer for everything."

"It's like being on the Titanic," he said of being a member of the press. "The iceberg is coming, and you guys are hanging on to your journalistic integrity, playing your violin as the ship goes down."

"For the longest time I was considered the worst president of all time. That has changed. I needed eight years, a catastrophic flood, a war built on a lie and an economic disaster. The new guy only needed a hundred days."

Watch a segment from the special below: