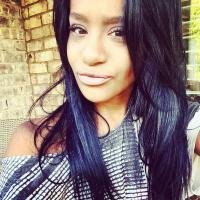 Bobbi Kristina Brown, the only child between the late Whitney Houston and singer Bobby Brown, has passed away at the age of 22.

Bobbi Kristina died Sunday at Peachtree Christian Hospice in Georgia, six months after she was found face-down and unresponsive in a bathtub at the home she shared with boyfriend Nick Gordon.

"Bobbi Kristina Brown passed away July, 26 2015, surrounded by her family. She is finally at peace in the arms of God. We want to again thank everyone for their tremendous amount of love and support during these last few months," a representative for the Houston family said in a statement.

The manner she was found in was eerily similar to that of her mother, who died three years earlier in a bathtub after a drug overdose. A police report described Bobbi Kristina's scene as a "drowning."

Gordon, who has not allowed to see Bobbi Kristina since the incident by the family, was previously named as a person of interest by police.

No charges have been filed but that could change with the passing of Bobbi Kristina.