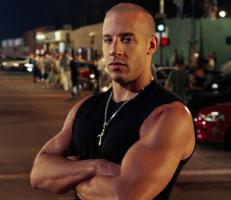 "What Facebook didn't realize is something very big was about to happen, and that was -- for the first time in history, and it's kind of a fluke they didn't see this coming -- when I jumped on that page in April 2009, I started talking to people," Diesel tells EW. "In the realest ways."

"When I had started my page, the only person that had a million fans was Barack Obama. Because it was first-quarter 2009, and he'd just got elected as President, because of social media."

"So, when I started talking to the fans, I became the No. 1 page in the world. Over Coca-Cola, over huge companies. And it was only because I said: 'Hi, guys, I love you.'"

"Facebook used to ask me to come up to their office to explain what the f-ck I was doing, and why I had so many fans."

"What was unique was: I never let anyone do a post, I never let anyone post for me in the last four years. My audience knows me so well on the page that if my producing partner's in the room when I post, they'll know somebody was around me."

"That's kind of cool, that's how sophisticated they are. Facebook really owes me billions of dollars," he laughs. "But whatever."

The 45-year-old actor's page boasts more than 41 million fans. Most recently, a video in which he covered Rihanna (photos

"Naturally, I became self-conscious, and thought maybe I shouldn't have exposed myself like that," he says. "Then I had dinner with my dad, and surprisingly, he said he loved it and thought it was deep on a few levels."