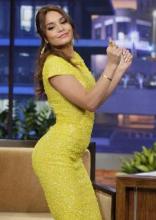 "It was amazing," said Hudgens. "It's Madonna's party so she's there and has her dancer's there. They were all dancing with each other and there were dance-off's happening."

"I was like I gotta jump in on this action. They need some of Vanessa. So I had a dance- off with her dancers and I took the prize!"

"People were literally like 'you're shot hot!' When it comes to my dancing, I had to admit it, but there's a lot of booty poppin' involved."

"Hang on, if there was some kind of demonstration," said Leno. "I'm old. I don't know what that could be."

On behalf of all Vanessa Hudgens fans, Thank you Mr. Leno.