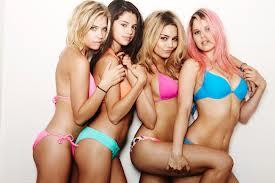 ) and Rachel Korine has been released.

The film, which features the one-time Disney stars getting arrested in bikinis, follows the girls who are desperate to get out of their boring college town.

They land in jail after robbing a restaurant to fund their spring break vacation but find themselves bailed out by a drug and arms dealer who wants them to do some dirty work, played expertly by James Franco.

'Spring Breakers' has a release date of March 22.