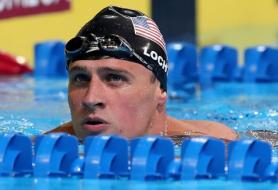 The admission and security footage released by Brazil throws water on Lochte's claim that the quartet was robbed at gunpoint. It is believed they lied about the robbery to cover up losing their money and involvement in the gas station vandalism.

"The four athletes (Bentz, Conger, Feigen and Ryan Lochte) left France House early in the morning of August 14 in a taxi headed to the Olympic Village," says the USOC of what it has uncovered.

"Once the security officials received money from the athletes, the athletes were allowed to leave."

"The behavior of these athletes is not acceptable, nor does it represent the values of Team USA or the conduct of the vast majority of its members."

"We will further review the matter, and any potential consequences for the athletes, when we return to the United States."

"On behalf of the United States Olympic Committee, we apologize to our hosts in Rio and the people of Brazil for this distracting ordeal in the midst of what should rightly be a celebration of excellence."

The USOC confirms that the athletes' passports have been released and they recently departed Rio. Lochte arrived the US earlier this week, as he left the city hours before Brazilian authorities ordered their passports to be seized.

Lochte has now issued an official apology for lying about the robbery.