Uma Thurman Lashes Out At Harvey Weinstein: 'You Don't Deserve a Bullet' 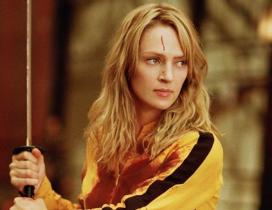 Uma Thurman is apparently thankful for the downfall of Harvey Weinstein.

Thurman, who starred in seven movies from Weinstein including 'Pulp Fiction' and 'Kill Bill', isn't mincing words about her feelings for the disgraced producer.

"I am grateful today, to be alive, for all those I love, and for all those who have the courage to stand up for others," she told her fans on Thanksgiving.

"I said I was angry recently, and I have a few reasons. I feel it's important to take your time, be fair, be exact, so... Happy Thanksgiving Everyone!"

"Except you Harvey, and all your wicked conspirators. I'm glad it's going slowly. You don't deserve a bullet."

Thurmsn was referencing an earlier interview in which she said: "I don't have a tidy soundbite for you, because I have learned, I am not a child. And I have learned that when I've spoken in anger, I usually regret the way I express myself. So, I've been waiting to feel less angry, and when I'm ready, I'll say what I have to say."