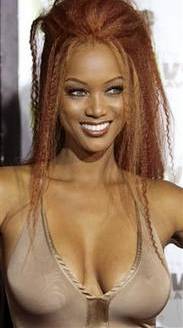 Talk about keeping it real: Tyra Banks underwent a televised sonogram on her new talk show to prove that her breasts aren't fake.

"I'm tired of this rumor. It's something that's followed me forever", the supermodel said on "The Tyra Banks Show."

After Banks asked the men in the audience to leave, Dr. Garth Fisher from ABC's "Extreme Makeover" performed a touch test and then the sonogram. He concluded: "Tyra Banks has natural breasts; there are no implants".

"By no means am I saying a breast implant is a bad thing, but it's not a choice that I made," the 31-year-old model said. "But it's something that a lot of the public ... think that I have, and that's so frustrating for me".

Banks, who models for Victoria's Secret, also displayed how her push-up bra exaggerated her body.

The hour-long show was, as Banks declared, "all about breasts!" It also featured lessons on proper fitting and an appearance from a slimmed-down Anna Nicole Smith. Aside from her talk show, Banks also hosts reality show "America's Next Model" on UPN.