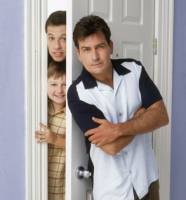 While most kids of his age would be happy to have a summer job, the kid from 'Two and a Half Men' has signed a rich new deal.

Angus T. Jones, who plays Charlie Sheen's nephew on the show has signed a minimum 26 episode deal worth $7.8 million over the next two seasons, plus a $500,000 signing bonus.

CBS has committed to 48 episodes over the next two seasons, so it Jones were to stay on for the duration of the show, he could earn close to $15 million.

His contract had to be approved by an L.A. County Superior Court judge since he is a minor.

The star of the show, Charlie Sheen, signed a deal that will pay him around $2 million per episode in May. That translates to $52 million over the next two seasons.