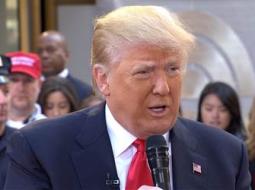 In a chat with Chris Cuomo on CNN's Monday, the host asked Trump to explain why he described Hillary as an "enabler" at a recent rally.

"It's only retribution for what she said. She is playing the woman's card to the hilt," Trump said.

"I watched over the weekend, everything is about 'woman' and 'Donald Trump raised his voice.' And you know it's all nonsense. You know what? Women understand it better than anybody."

"It is a big thing. Hey, look, he was the biggest abuser of women, as a politician in the history of our country. He was impeached. He was impeached and then he lied about it, he said nothing happened with Monica Lewinsky, then he said, 'Sorry, folks it actually did happen.' And the guy was impeached for lying."

Trump has said Hillary Clinton "would go after these women and destroy their lives. She was an unbelievably nasty, mean enabler, and what she did to a lot of those women is disgraceful."