Trailer For Ricky Gervais' 'David Brent: Life On The Road' 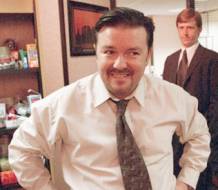 Ricky Gervais reprises his 'The Office' character David Brent for special movie 'Life On The Road' set for later this summer.

The big screen feature for Gervais' office manager turned mockumentary star David Brent sees him on the road pursuing his dream of being a rock star.

He's touring with his band Foregone Conclusion while juggling his new job as a travelling salesman and battling several mishaps.

'David Brent: Life On The Road' will get a theatrical release in the UK on August 19 but US audiences will have to watch it on Netflix later this year.