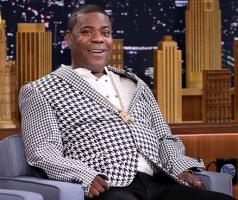 Tracy Morgan jokes with Jimmy Fallon that with David Letterman no longer in late night and Donald Trump leading the polls, he almost wants to go back into a coma.

Morgan then riffs about the new Star Wars movie, remarking: "Things are different, man. Hold up, one black dude in the whole galaxy?! I'm pissed off, man!"

"That was Lando Calrissian's nephew. He pulled some strings to get him in the cadets. They got him doing that crappy job. He left a good union job as a Stormtrooper. Good union job! I tried to get him an application for sanitation."

"I'm gonna tell you something, man. Chewbacca's not good, man. He's behind in his child support payments right now. Everybody knows Chewbacca's in rehab right now!"