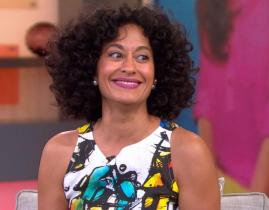 Tracee Ellis Ross is threatening to do fewer episodes of hit comedy 'Black-ish' if she doesn't get equal pay compared to co-star Anthony Anderson.

THR reports that with negotiations ongoing for the fifth season, Ellis Ross "feels that if she isn't brought up to Anderson's level, she may opt to appear in fewer episodes to make up the disparity by guesting on another show."

It's believed that the move will significantly increase her salary although it likely still wouldn't parallel that of Anderson's since he's an executive producer and has been with it since its debut.

Still, the conversation is happening with increasing frequency in part due to the Time's Up movement.

Mark Wahlberg recently donated the $1.5 million he received from 'All the Money in the World' reshoots after there was outrage that co-star Michelle Williams' received 1% of that.