'Top Model' Hopefuls To Get Second Audition After Stampede 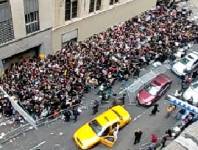 After a New York casting call for 'America's Next Top Model' turned ugly as hundreds of hopefuls were caught in a stampede, Tyra Banks has decided that they will get another chance to compete.

"To all the Top Model hopefuls who were affected by the New York casting, we are doing everything we can to make sure that ALL the girls who weren't seen, get an opportunity to audition and we'll update you on our plans very soon," Banks said in a statement Monday.

"It is so important to me to redefine beauty and make sure that everyone gets a fair chance to pursue their dream. I am beyond excited for Cycle 13; for the first time ever, young women 5'7" and under have a shot at becoming America's Next Top Model! I encourage each girl to come out ready to rock the runway and show off their fiercest pose. I'm rooting for all of you!"

Police were forced to shut down the casting call following the incident, triggered by an overheating car, which resulted in three arrests and six injuries.

The upcoming 13th cycle of the CW reality series will, for the first time, feature only young women 5 feet, 7 inches and under. This contributed to the number of girls at the audition with many believing it was their final shot at a modeling career.

"I'm 5-foot-3. There's no way I can make it into a model agency," one hopeful lamented about the lost chance over the weekend. "They would turn me away at the door. We had an opportunity and it was taken away from us. We want another date."