Tom Wheeler Responds To John Oliver That He's 'Not A Dingo' 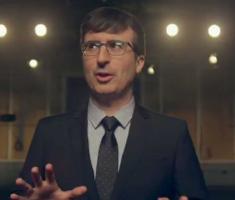 Asked for a comment on John Oliver's take on Federal Communications Commission chairman Tom Wheeler and the debate over net neutrality, Wheeler said he wanted to clarify that he was "not a dingo."

This after the 'Last Week Tonight' host said having Wheeler, a former lobbyist for the cable companies, watch over the FCC was the "equivalent of needing a babysitter and hiring a dingo."