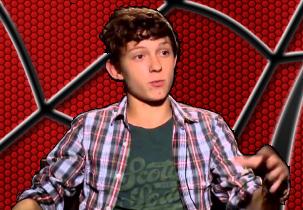 Tom Holland has revealed he's signed on to play a young Peter Parker aka Spiderman in six Marvel movies.

Holland reveals in the latest issue of 'The Hollywood Reporter' that he's agreed to three solo 'Spider-Man' movies and three appearances in other Marvel films.

"They give you options and those could be exercised whenever. Like a cameo in Avengers," Holland explains. "I'm unclear as to which movies though."

"I do know I have three Spider-Man appearances and three solo movies contracted. But if you have another movie, Marvel is so good at working around it. They’re very respectful of your life, really."

"They understand that you have to work on other movies, and they try and fix it up so you can work around each other."