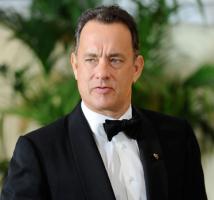 "I'm not pouring Baileys in my cereal, I'm not sitting here trying to find a Johnnie Walker," Priebus told CNN.

"'I'm not pouring Baileys on my cereal' is a very specific reference for something you are not doing," Colbert said before he pulled out a bowl of what he joked was "an Irish continental breakfast."

"You know, after having a bite of that, I think I'm changing my political affiliation," Hanks said. "And I'm going to vote Republican every chance I get."

"They're going to be serving this at the convention as part of the suicide pact," Colbert quipped.

"Can we just admit that this is so friggin' delicious?," Hanks replied.