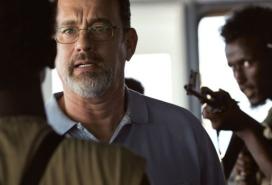 Tom Hanks had some fun on 'The Graham Norton Show' after the host showed a photo of Bill Murray making a crying face while posing a toddler.

When the photo went viral, many fans thought Murray looked a lot like Hanks in the picture.

"Well, I've been doing a pale imitation of Bill Murray for most of my career," Hanks joked. "It actually works out."

"I know that it's not me, because I did not take that picture," he said. "But, yeah, I can make that face."

Hanks then donned a similar orange hooded jacket and recreated the Bill Murray photo with the help of fellow guests Gemma Arterton and Joseph Gordon-Levitt.