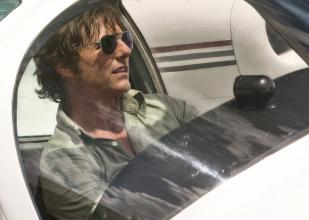 Tom Cruise plays a pilot who lands work for the CIA and as a drug runner in 'American Made'.

Cruise's character is based on real-life pilot Barry Seal, who worked as a drug smuggler for the Colombian cartels and an informant for the CIA in the 1980s.

The actor says he wanted to take on the role because he was intrigued by Seal's life.

"I don't agree with what he was doing, but you can't help but be utterly fascinated by it," Cruise tells People magazine.

"One of my favorite authors is Mark Twain, and Seal reminds me of one of his characters," he says. "It's not every day you get to play a character who is a devoted husband and father and a drug runner, a CIA operative working for the DEA."

It also gave Cruise a chance to get back in the pilot's seat.

"Doug Liman and I are both pilots, and we shot this very differently -- in a very real way."