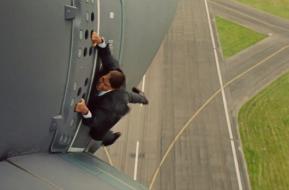 Tom Cruise is known for performing his own stunts but the star apparently injured himself while filming his latest stunt for 'Mission: Impossible 6'.

The 55-year-old actor appeared to injure himself while filming a scene Sunday where he jumps between two buildings.

In video obtained by TMZ, Cruise is attached to a harness while making the leap. However, he falls short and crashes hard into the side of the building.

He's able to pull himself up but appears to have a limp before collapsing next to crew members.

'Mission: Impossible' fans will remember the opening scene of 'Rogue Nation' featured Cruise's Ethan Hunt hanging onto an Airbus 400 as it takes off.