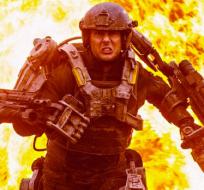 When Tom Cruise's 'Edge of Tomorrow' was released in 2015, it received positive reviews from critics but the film didn't fare as well as expected at the box office.

And director Doug Liman thought the title of the film was to blame. So when the movie was released on DVD and BluRay, the film had a new title: 'Live Die Repeat: Edge of Tomorrow'.

Liman explains in an interview that he had always wanted to go with 'Live Die Repeat' but studio executives had fought him on it.

"I fought vehemently and lost. And then when the film came out and people loved it but the box-office wasn't as good as it should have been, I really railed into the executive at Warner Bros who'd insisted that Edge Of Tomorrow was the better title."

"I was like, 'It clearly is not. You were wrong.' I committed the cardinal sin of telling somebody in Hollywood when they're wrong, like, literally – I ended up having to call the person and apologize for pointing out that they were wrong."

"And they started titling it the title I always thought it should have, which is Live Die Repeat. But they tiptoed around it."

There's no timeline on the sequel but Liman is confident that the studio will get around to it.