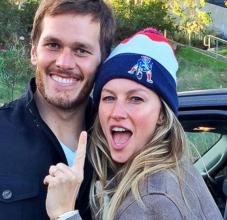 Tom Brady is backtracking from his endorsement of friend and frontrunner Donald Trump.

This after the NFL star said earlier this month that Trump as president "would be great. There'd be a putting green on the White House lawn, I'm sure of that!"

But in an interview with WEEI's Dennis & Callahan Show, Brady clarified his remarks and said they were "off-handed" comments.

"It's just a different world than when I started in professional football. Even an off-handed comment like that, like you said, that people may run with," he said.

"And I understand why people do run with it because you get the clicks and that type of stuff. It's just people doing their job. A comment like that, I try to have fun with certain things."

"He's been a fun guy that I've had a lot of time around. The fact that he's running has obviously led to a lot of stories and debates and ratings were huge for all those Republican debates and so forth."

"One way or another, it's so far away from when the election will be."

"Whatever I vote is going to be my own personal choice based on how I feel. I don't even know what the issues are. I haven't paid attention to politics in a long time. It's actually not something that I really even enjoy. It's way off my radar."