After her untimely death over the weekend, NBC's 'Today' show decided to devote a segment of the program to Amy Winehouse.

However, while showing clips of some of her songs, the show mistakenly called her hit "You Know I'm No Good" as "You Know I'm Dead."

Winehouse performed 'You Know I'm No Good' and 'Rehab' at the 2008 Grammy Awards via satellite.

The wins earned her an entry in the 2009 Guinness Book of World Records for Most Grammy Awards won by a British Female Act. 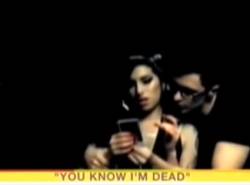