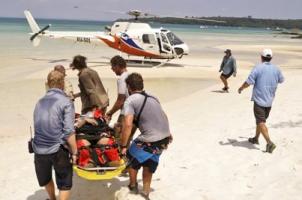 Three players collapsed from heatstroke and one of them had to be evacuated in the latest episode of 'Survivor: Kaoh Rong'.

After a brutal challenge in scorching Cambodian heat, Debbie, Cydney and Caleb fell to the ground. The medics attempted to get their temperature down amid the chaos and while that appeared to work with the first two, Caleb wasn't so fortunate.

When saline, oxygen and ice didn't help, medics made the call to evacuate Caleb and pull him from the game. The former 'Big Brother' contestant didn't want to leave but, as host Jeff Probst explained, it wasn't his call to make.

The reward challenge was set in broad daylight, in the hot sand, without an ounce of shade or water.

There is no doubt the events in the episode will affect production to perhaps be more thoughtful of the contestants and the conditions they are facing on a daily basis including an already dehydrated body and severe sunburn.

It also demonstrated the lack of medics on the production. With only Dr. Joe juggling duties, it was glaringly obvious that the reality show wasn't prepared for 3 contestants to go down at one time.

So far 'Survivor: Kaoh Rong' is living up to Jeff's promise as the "most brutal season ever."