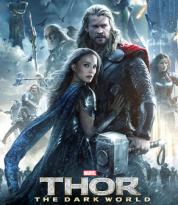 'Thor's Chris Hemsworth and Natalie Portman joke about the large difference in their heights in an appearance on 'The Graham Norton Show'.

"I was mainly cast because I can make anyone look huge," says Portman. "I'm just extraordinarily short. But they usually had a ramp that I would walk up to be somewhere near his face."

But the real laughs come when Norton pulls out the star's action figures and notices Portman's Jane only reaches up to Thor's waist.

"Children will have hours of fun playing with those," he quips as Paul McCartney and Katy Perry (photos

) can't help but chuckle. "What are you doing with those dolls?!"