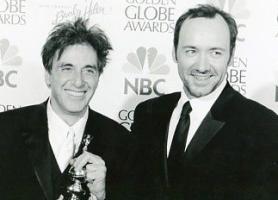 'This Is Us' edited out a character saying Kevin Spacey's name from its latest episode due to the recent allegations surrounding the actor.

Tuesday's episode of the NBC drama included a 2008 flashback scene in which a struggling actor learns his roommate has gotten a role in a major movie.

The scene was filmed with the excited roommate saying it was a Kevin Spacey film.

However, producers decided to edit out Spacey's name and replace it with Christian Bale citing "recent events."

The allegations, which include actor Anthony Rapp alleging Spacey made sexual advances toward him when he was just 14, have led to others stepping forward with similar experiences.

Netflix has since announced the forthcoming season of Spacey's 'House of Cards' will be its last and abruptly halted production on Tuesday.