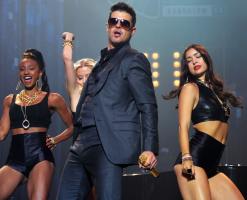 A jury has found that Robin Thicke and Pharrell Williams copied Marvin Gaye's music to create 'Blurred Lines', the biggest hit song of 2013.

They will have to pay Gaye's children nearly $7.4 million for copying the music, breaking it down to $4 million in copyright damages plus profits that can be attributed to infringement.

The Gayes' lawyer said Williams and Thicke stole the music from Gaye's 'Got to Give It Up' outright.

Williams, who said he wrote the hit in an hour in 2012, admitted Gaye's music was part of his youth but said he didn't intentionally copy the song.

Gaye's daughter, Nona Gaye, wept as the verdict was read and later told reporters: "Right now, I feel free. Free from Pharrell Williams' and Robin Thicke's chains and what they tried to keep on us and the lies that were told."

The Gaye family is also seeking an injunction against 'Blurred Lines', which will be the first step for it to negotiate royalties for Thicke's version.