'The Lion King' Will Return To Theaters in Digital 3D 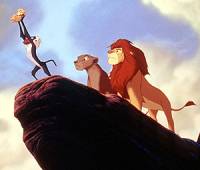 Disney will be bringing back 'The Lion King' to theaters in September -- in digital 3-D.

The studio is hoping the re-release will add to the film's enormous box office tally and further help boost Blu-ray sales of the animated classic in October.

The 1994 feature is the highest-grossing hand drawn animation film of all time with $328.5 million domestically and $783.8 million worldwide.

It was also the year's highest grossing G rated movie by a longshot and second in the domestic chart -- only behind the Oscar winning 'Forrest Gump'.

Check out the trailer for the re-release below. Of course, there's no 3-D to see but just the music is enough to take you back: