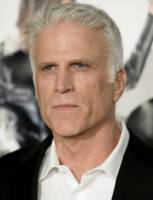 The CBS drama had been in search of a new lead after Laurence Fishburne said he would be leaving the show last month.

Danson will play the new CSI supervisor for the grave shift as he moves from the crime lab in Portland.

He will join the team as it is still dealing with the fallout from last season's take-down of serial killer Nate Haskell.

"You can create a new character on the page, but until the perfect actor comes along and breathes life into it, it's just words," says executive producer Carol Mendelsohn. "We're very excited Ted Danson came along."

"From the moment we all started talking about the role, it was clear he couldn't be more perfect," adds executive producer Don McGill.

"Intelligence, wit, warmth, depth of character and emotion, he brings it all. And now he'll have to bring latex gloves, too."

Danson will make his debut on the season premiere on CSI's new slot on Wednesday, September 21 at 10 PM.

And if you're a fan of the actor's HBO series, fear not. Danson will continue to star on 'Bored to Death' with Jason Schwartzman and Zach Galifianakis.