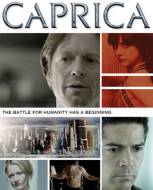 The network has announced that the five remaining episodes of the prequel will be removed from its schedule next week and rescheduled to air in early 2011.

"We appreciate all the support that fans have shown for 'Caprica' and are very proud of the producers, cast, writers and the rest of the amazing team that has been committed to this fine series," says Mark Stern, Executive VP of Original Programming. "Unfortunately, despite its obvious quality, 'Caprica' has not been able to build the audience necessary to justify a second season."

But that's not the end of 'Battlestar Galactica'. The cancellation comes less than a week after Syfy announced the development of another spinoff series from the show. 'Blood & Chrome' will follow a young William Adama fresh out of the academy — and in the 10th year of the first Cylon war.

Syfy is hoping the series can capture some of the magic of the original series with something more action-filled.