Susan Sarandon Blasts Hillary Clinton As Someone Who Can't Be Trusted 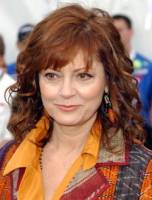 In an extended chat about why she passionately supports Bernie Sanders, Susan Sarandon explains why she broke up with Hillary Clinton and says the Democrat frontrunner just can't be trusted.

"I'm more afraid of Hillary Clinton's war record and her hawkishness than I am of building a wall but that doesn't mean that I would vote for Trump but I'm not sure Trump's going to get it," she says.

"I think all kinds of crazy things can happen at those conventions."