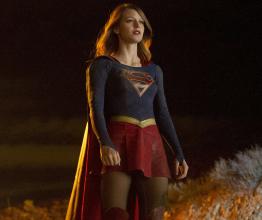 Superman will make his first appearance on 'Supergirl' during the second season premiere.

Moving from CBS to the CW, 'Supergirl' will be returning to the airwaves in a big way with an assist from the Man of Steel himself to make sure fans stick around.

The series teased and hinted at the character during the first season, without an encounter in the flesh. However, Superman will make his mark on the series when he visits his cousin Kara aka Supergirl in National City at the beginning of the season.

The role is currently being cast but producers couldn't be more excited.

"Greg Berlanti, Ali Adler and I are beyond thrilled to welcome Clark Kent and his slightly-more-famous alter ego to the world of Supergirl," says executive producer Andrew Kreisberg. "Superman will be appearing in the first two episodes of the new season and we cannot wait to see who next dons the red cape!"

Last year, producer Sarah Schechter said Superman wasn't featured because "it's not about him... it's her show and it's about her and he is just sort of a shadow in the back of her psyche, and I think that's the right way to portray him because that's how she experiences it."

Melissa Benoist will, of course, return as Supergirl. It will a return of sorts for Superman to the CW, which aired 'Smallville' starring Tom Welling for a decade from 2001 to 2011.