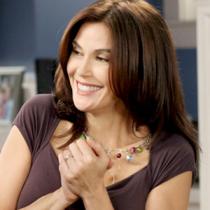 Teri Hatcher, who starred in 'Lois and Clark: The New Adventures of Superman' as Lois Lane, has joined the cast of 'Supergirl'.

Although details on her character are being kept under wraps, Hatcher will be one of the season's big villains with a multi-episode arc.

"No offense to any of the wonderful actresses who have also played the part, but Teri Hatcher is my all time favorite Lois Lane," says executive producer Andrew Kreisberg.

"To have her come back to the SuperWorld in a completely different part is an unbelievable gift to me, Greg, and the fans,"

Fans will recall Dean Cain, who starred opposite Hatcher on 'Lois and Clark' as Superman, has already appeared on 'Supergirl' as Supergirl's adoptive father. Lynda Carter, best known for 'Wonder Woman', appeared on The CW series as the President and 'Smallville's Supergirl Laura Vandervoort (photos