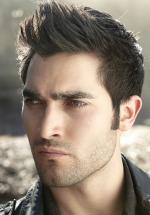 The drama series, which will be moving from CBS to CW next season, will be returning with an assist from the Man of Steel from the get-go.

The series teased and hinted at the character during the first season, without an encounter in the flesh.

However, Superman will make his mark on the series when he visits his cousin Kara aka Supergirl in National City at the beginning of the season and reportedly be in the opening scene of the season.

"Greg Berlanti and I have wanted to work with Tyler for ages, so this worked out perfectly because Tyler is Superman," executive producer Andrew Kreisberg says in a statement. "We are so thrilled and humbled to add another amazing actor to the legacy of this iconic character."

Hoechlin is best known for playing werewolf Derek Hale on the first four seasons of MTV's 'Teen Wolf'. He recently starred in Richard Linklater's 'Everybody Wants Some!' opposite Blake Jenner, Supergirl star Melissa Benoist's husband, which may have helped him land the job.