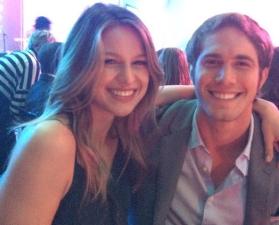 Melissa Benoist has filed for divorce from husband Blake Jenner after a year of marriage.

The 'Supergirl' star has cited "irreconcilable differences" for the split in court documents obtained by TMZ. Neither party has asked for spousal support and the pair don't have any children together.

Jenner guest starred on two episodes of 'Supergirl' in its first season.

"I love working with him," Benoist raved at the time. "We only have fun working together. He's my person to act with. He's my favorite scene partner, always."

Interestingly, in the same interview with People, the 28-year-old Melissa hinted that the role had changed her.

"On the outside, it hasn't really changed quite so much. But I feel like I've personally changed," she said. "This has taught me so much about strength and has made me just discover how strong I can be in certain situations and I realized I can do some pretty hard things."