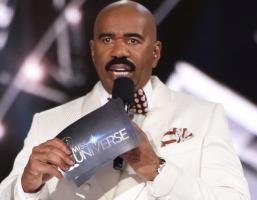 Steve Harvey claims he needed armed security after the 2015 Miss Universe gaffe, where he mistakenly announced Miss Colombia as the winner when it was actually Miss Philippines.

"I live on a dead-end street and it got real when things started coming over the gate," he tells the April issue of Cigar Aficionado. "Empty boxes with bows and pictures of bombs."

"And these with death threats on social media that would pop up from fake IP addresses. I wound up with 24-hour armed security at my house. I have two armed guards there full-time to this day."

"In the Philippines, they love me — but I can't go to Colombia," says the 'Family Feud' host. "The next morning, there was this massive crowd, all around my car outside the hotel—all these Colombians giving me hell."

"I got cussed out in Spanish so bad that I know profanity in Spanish now."