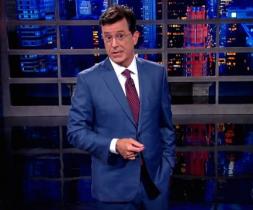 Stephen Colbert isn't a fan of the new Harry Potter book, which will take a play focused on the wizard in his 30s and turn it into a book.

"I know what you're thinking but it's not about Harry's friendship with Macaulay Culkin," he jokes. "The play actually takes place nineteen years after the last book and features a 30-something Harry balancing his job at the ministry of magic with being a father."

"That really sounds depressing. I love that we're going to get something else about that whole world but let's just admit that Harry Potter's life peaked when he was 17."

"Captain of the Quiddich team, big chosen one on campus, now he's just some guy. Who are his enemies even going to be? Phil from accounting? A slowing metabolism? A vague restless feeling when he looks at travel posters?"

"You might as well call it 'Harry Potter and the Sorcerer's prostate. So please spare us. This goes for all beloved childhood stories."