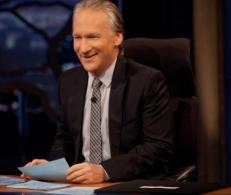 Stephen Colbert takes a shot at trying to bring Bill Maher back to religion.

The host of HBO's 'Real Time with Bill Maher' is an atheist, but he was raised Catholic.

"If you're wrong, you're an idiot," Colbert says trying to convince Maher. "But if I'm right, you're going to hell."

"I do admit there are things in the universe I don't understand," replies Maher. "But my response for that is not to make up silly stories or to believe intellectually embarrassing myths from the bronze age."

"These are men who did not know what a germ or atom was. Or where the Sun went at night. That's where you're getting your wisdom. Anyway, let's not argue."

"You see, my religion teaches me humility in the face of this kind of attack," quips Colbert.