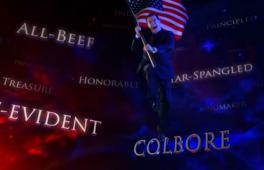 Stephen Colbert changed up the show's title sequence from 'Colbert' to 'Colbore' after Gwen Stefani flubbed the show's name during her Emmy presentation.

'Voice' judges Gwen Stefani and Alive Adam Levine were presenting the award for Outstanding Variety Series when Stefani mistakenly announced the name of the eventual winner as 'The Colbore Report'.

Levine tried to correct Stefani but it was too little too late.

Backstage during the show, Colbert joked: "I think I might just change my name to Colbore. I am the Colbore — resistance is futile. Oh, you will be absorbed."

The opening credits of his Comedy Central featured the flub during the collection of words that go by.

Click the speaker in the bottom right to turn on audio: