Stephen Colbert Gets Cartoon Trump To Admit It's All An Act 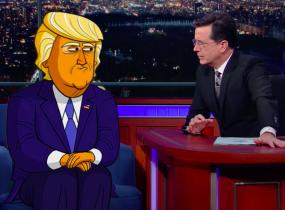 Stephen Colbert says Donald Trump may not be as Trump as we've been led to believe.

"It's the long con, Stephen," says Trump. "The Apprentice would've never worked if my catchphrase was 'I'm afraid but we're going to have to let you go.'"

"It's a show. A charade. A bit of a show for the peasants in the cheap seats. By the way, where are my manners? Would you care for some tea. It soothes the soul as it pampers the senses. It's delightful, Stephen."

"Well, there were two things that were true: I actually want to deport the Mexicans and my penis is huge."

"I'm the greatest character actor of all time. Meryl Streep can kiss my a**."