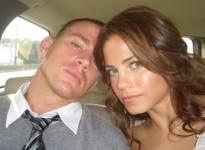 The two tied the knot on Saturday afternoon on the grounds of Church Estates Vineyards, the same venue where Fergie and Josh Duhamel were married last January.

"It was unbelievably beautiful, and I'm so proud to have introduced them," Shankman wrote on his Twitter page.

Channing Tatum and Jenna Dewan started dating after they met on the set of their 2006 movie. 'Step Up' earned $21 million in its opening weekend despite a string of mixed reviews and exceeded the film's budget of $12 million.

It earned $65 million domestically and $115 million worldwide by the time its run was complete.

The two became engaged in September of last year as Tatum, who stars in the upcoming 'G.I. Joe: The Rise of Cobra' flick, popped the question while they were on vacation in Maui.