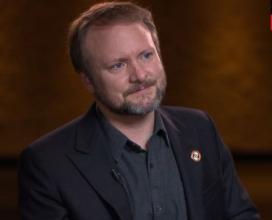 'Star Wars: The Last Jedi' director Rian Johnson is clearing up who the title is referring to.

Ever since the title for the next 'Star Wars' movie was announced, we've believed the title refers to Luke Skywalker, who Rey comes face to face with at the end of 'The Force Awakens'.

Especially since the film's opening scroll also described Luke as the last Jedi and Yoda referred to him as the same in Episode VI 'Return of the Jedi'.

However, some fans believed this was a misdirection and Rey was actually the last Jedi.

But now Johnson has laid that speculation to rest.

"It's in the opening crawl of The Force Awakens," director Johnson tells The New York Times. "Luke Skywalker, right now, is the last Jedi."

"There's always wiggle room in these movies—everything is from a certain point of view—but coming into our story, he is the actual last of the Jedi. And he's removed himself and is alone on this island, for reasons unknown."

In the first teaser trailer, released in April, Luke told Rey, "It's time for the Jedi to end."

"It sounds pretty dire. That's something that we're definitely going to dig into," he teases. "The heart of the movie is Luke and Rey. It follows all the other characters, but its real essence is the development of the two of them. It's absolutely tied up in that question of, 'What is Luke's attitude toward the Jedi?'"

He also reveals that there really wasn't a roadmap when Lucasfilm brought him on to direct.

"I had figured there would be a big map on the wall with the whole story laid out, and it was not that at all. I was basically given the script for Episode VII; I got to watch dailies of what JJ Abrams was doing. And it was like, where do we go from here? That was awesome."